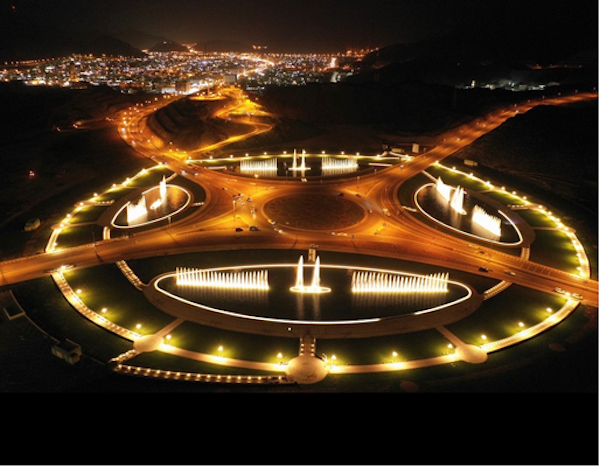 The 89-kilometre Sharjah – Khor Fakkan Road, built at a cost of AED6 billion, and passing through the Hajar Mountains, is expected to reduce travel time between the two cities to 45 minutes.

Al Rufaissa Dam, Al Adwani Tower, the Al Rabi Tower, and a folklore area will also be opened after their restoration as per directives of the Sharjah Ruler.

In remarks to the Emirates News Agency, WAM, Major General Saif Al Zari Al Shamsi, Commander-in-Chief of Sharjah Police, said that the General Directorate of Sharjah Police has set up a traffic plan regarding the distribution of police patrols along the Sharjah-Khor Fakkan Road, which will run from Sharjah to the central region-Al Dhaid and then to the Eastern Region, Khor Fakkan.

Sharjah Electricity and Water Authority, SEWA, has completed the installation of more than 2282 lighting poles on the Sharjah-Khor Fakkan Road.

The SEWA chairman, Dr. Rashid Al Lim, said that SEWA is keen to make use of the latest international systems in installing solar lighting poles. He added that installing solar street lighting in most of Sharjah city has resulted in reducing traffic accidents caused by a lack of lights while also improving the look of residential neighborhoods.

Hassan Al Ali, Manager of Logistics for SEWA, noted that they have started to use technology that allows for the possibility of timely central control in remote lighting units. A pre-programmed mechanism will be able to reduce lighting levels during specific periods.

Abdullah Sultan Al Owais, Chairman of the Sharjah Chamber of Commerce and Industry, said that Sharjah's Eastern Region is witnessing a major boom in infrastructure, service and development projects. This, he said, was being led by improvements to the road networks, an aspect which has been given much attention by H.H. Dr. Sheikh Sultan bin Muhammed Al Qasimi, Supreme Council Member and Ruler of Sharjah.

Other projects include work on the fort and the historic city wall and the restoration of the old market, as well as defensive towers and houses in the mountains. The fort will serve as a museum for antiquities from Sharjah's Eastern Region.